Rob Cook
"I would rather attempt something great and fail. Than to do nothing at all and succeed"

Arrived in Mexico today after 9 hrs on a midnight flight. Had a tour of the historical sights and buildings. The cathedral was stunning, the best I have ever seen.  It is the second one built there, as an earth quake destroyed the first.  It has been built out of the original pyramids which you can see behind. An early night although we have lost another 3 hrs. So are about a day behind now. 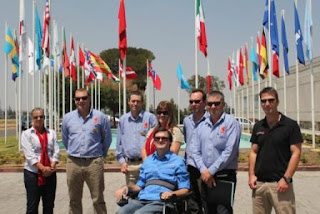 We have spent time in Mexico City and visited CIMMYT, a research station which focuses on wheat, maize and cropping systems. (photo above).  CIMMYT is a 78 hectare site at El Batan, 45 kilometers northeast of Mexico City and is situated 7,250 ft above sea level.  After this it was onto the Pyramids of Teotihuacan.  After a very early start we caught a flight to Obregon to visit AOASS, a representative body for grain farmers in the Senora area.  It has 7 members/union groups that form this not for profit organisation and over 40% of farmers use their services and sell grain to them.  We then visited with the Irrigation Group who act as the middle man between irrigators and the government. 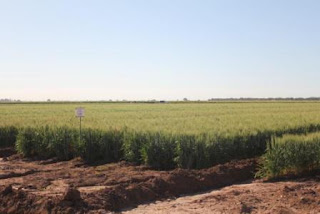 Yesterday saw us at the Obregon CIMMYT research station.  The trial plots can mimic most environments and conditions which allows CIMMYT to provide farmers with advise on the best practices.  The state of Senora is completely reliant on irrigation which pushes environmental issues to the top of their priority list.  We look forward to taking in the country side on our drive to Hermosillo before we depart Mexico.
Adiós mis amigos, catch you in California!!!
Posted by Rob Cook at 9:30 PM No comments:

Olá from Brasilia, Goiania and Cristalina

Olá!
On the road again....travelling south from Brasilia to the  Goiania Region visiting farms along the way including a soy bean farm which also grows Brazilian Mahogany. 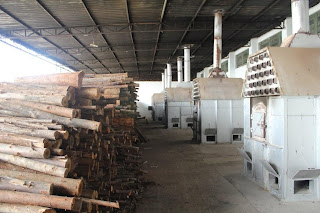 They have a large staff base who live and work on the farm.  The workers' children walk to school, which is only 200m from the front gate and also on the property.  We were treated to lunch beside their fish breeding ponds and fruit trees.  These are grown to feed their staff and also as a donation to the old age home in the local town - a very generous owner.  They use wood fires to dry their soya beans as gas is too expensive. After this we went onto "Goias Verde" a property not far from Cristalina and were taken for a tour by William Marchio.  He is pictured below with me as I taste the delights of brazilian produce. The corn is planted and harvested all year round. 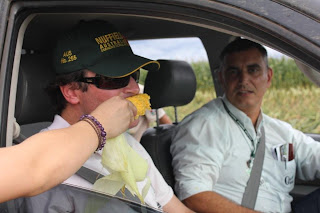 This 22,000ha farm employs 1300 people and produces corn, sorghum, soya bean, tomotoes, guarva and also hosts a feedlot.  All the waste from the crops goes into the 10,000 head feedlot which is completely undercover. 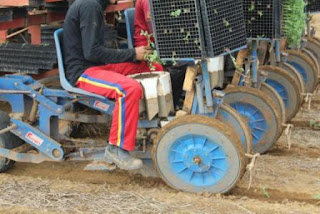 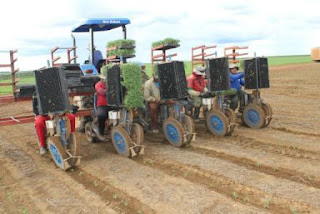 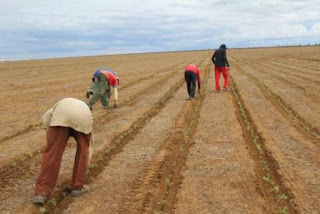 This crop of tomatoes covering 2200ha will be harvested mainly for sauce, although some will be hand picked for the domestic market. The countryside on the outskirts of the cities is quite scenic and intensly developed with numerous forms of agriculture. We have also visited a coffee farm, dairy and sugar cane factory, today is our third day of visiting farms and we still have two more before we depart Rio de Janeiro for Mexico City via Sao Paulo.
Catch up with you again soon, Rob
Posted by Rob Cook at 11:00 PM No comments:


We flew out of New Zealand on Sunday the 13th and arrived in Sao Paulo via Santiago that same evening.  On the Monday we were lucky enough to get a tour of Sao Paulo, which is the power house hub of Brazil - boasting a whopping 21 million people!!!  It features some of Brazils richest residences but the shanty villiages are still grossly populated and predominent thoughout much of the city. 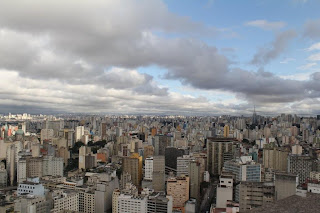 The view seen above surrounds us 360 degrees as far as the eye can see.  Tuesday featured a visit with Brazilian Agriculture Ministry, Lawyer Wilfrido Augusto Marques.  He is also a large land owner over here in farming crop, cattle and sheep, who also shows a major interest in genetics from NZ and Australia in both sheep and cattle.  Below is a photo of the 2011 scholars and Wilfrido Augusto Marques. 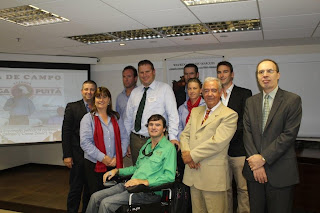 Tuesday evening we visited the Australian Embassy and had dinner with the Ambassador Brett Hackett.  It was great to be amongst some Aussies!!! 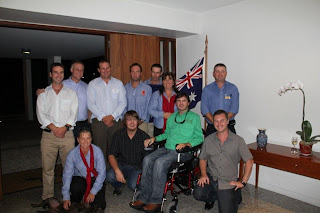 Over the next 6 days we will continue to travel Brazil - I'll keep you updated.
Catch you all later, Rob.
Posted by Rob Cook at 11:30 PM No comments:

Kia ora from the South Island

Busy but exhilarating few days. On Tuesday we travelled via the Inter Islander Ferry from Wellington on the North Island to Picton on the South. Very chilly day, the boat was awesome... even had wobbly sea legs that night going to bed! 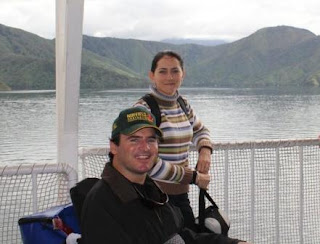 Along the South Islands beautiful east coast, on our drive from Picton to Hanmer Springs we spotted seals lazing on the beach. We were fortunate enough to stop and walk down to them. There were even babies playing in the rock pools. We thought it was amazing, although we chose not to risk getting too close. 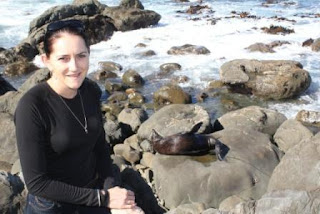 We had the pleasure of having our own personal tour guide Dave - our fellow NZ scholar - introduce us to the world famous "Kaikoura Seafood BBQ". 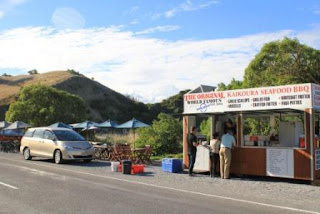 Wednesday saw a day of conferences and on Thursday we travelled from down the west coast to Reefton, where we caught up with local policemen - Taye Pugh 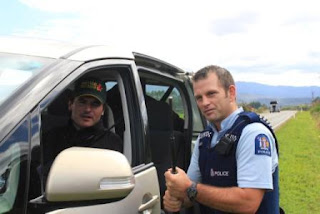 Had conference at Reeftons "Blacks Point Museum" and then returned to Hanmer Springs for the night.  Absolutely spectacular scenery and even a little snow on the mountain peaks!

Two more days in NZ before we head to Brazil.

Arrived in Wellington on Saturday the 5th.  We had the afternoon off so decided to have bit of a look around New Zealands "Windy City".

Today was kicked off with a traditional Maori welcome - Awesome!!!  Presentations for most of the day.  This evening included a Parliamentary Reception and tour of New Zealands fabulous Parliament House - one of the countries famous buildings, also known as the "Bee Hive"

Heading to the South Island tomorrow, catch you there! 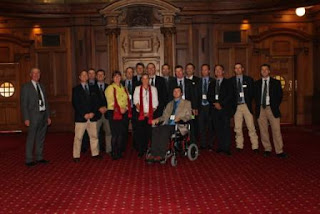 The Australian Scholars at Parliament House in Wellington
Posted by Rob Cook at 9:30 PM No comments:

A Tour Of Parliament House

Thought I would add another pic of the other 2011 Nuffield Scholars and I.  After a guided tour of Parliament House we dined with the Honorable MP Bruce Scott and his wife Joan. 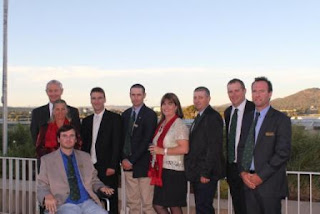 Its All Systems Go!!

Well the trip has started.  We arrived in Canberra to catch the ABARE conference, toured canberra today, more breifings tomorrow and then Saturday we head to New Zealand!!  One of the stops was Parliament House.  Not a real close up pic but thats her in the far back.

Catch you in NZ! 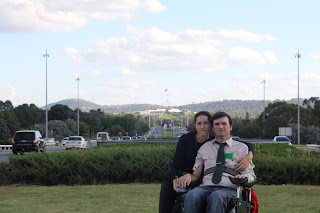 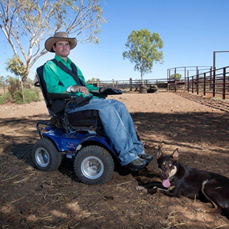 MY ARMS AND LEGS IN THE YARDS 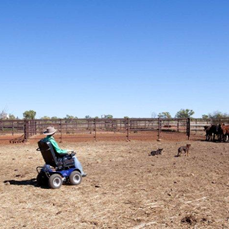 SOMEWHERE OVER THE RAINBOW